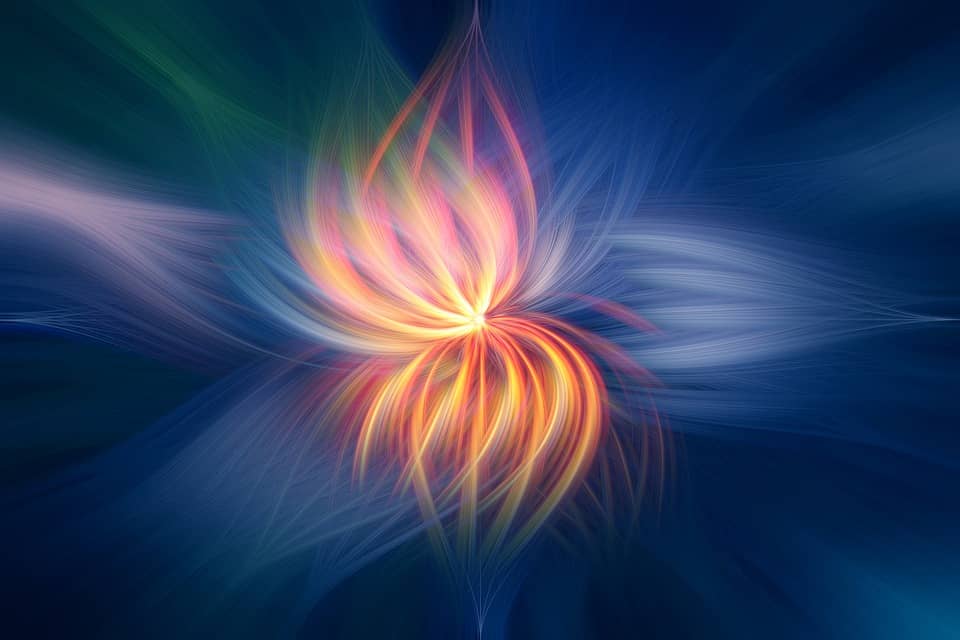 “Keep a mind that alights on nothing whatsoever.”

When Hui Neng heard this line from the Diamond Sutra he had a great awakening and went off in search of a Master of the Way.

After Hui Neng had made arrangements for his mother’s welfare, he took his leave. In less than thirty days he arrived at Huang Mei and bowed to the Fifth Patriarch Hongren, who asked him, “Where are you from and what do you seek?” Hui Neng replied, “Your disciple is a commoner from Hsin Chou in Ling Nan and comes from afar to bow to the Master, seeking only to be a Buddha, and nothing else.”

The Patriarch said, “You are from Ling Nan and are therefore a barbarian, so how can you become a Buddha?”

Worried that his other disciples would become jealous of the illiterate Hui Neng’s realization he sent him off to the back of the temple where he chopped wood and threshed the rice.

One day the Patriarch summoned his disciples together and said, “I have something to say to you: for people in the world, the matter of birth and death is a great one.

“All day long you seek fields of blessings only; you do not try to get out of the bitter sea of birth and death. If you are confused about your self-nature, how can blessings save you?”

“Each of you go back and look into your own wisdom and use the Prajna-nature of your own original mind to compose a verse. Submit it to me so that I may look at it. If you understand the great meaning, the robe and Dharma will be passed on to you and you will become the sixth patriarch. Hurry off! Do not delay! Thinking and considering is of no use in this matter. When seeing your own nature it is necessary to see it at the very moment of speaking. One who does that perceives as does one who wields a sword in the height of battle.”

The assembly received this order and withdrew, saying to one another, “We of the assembly do not need to clear our minds and use our intellect to compose a verse to submit to the High Master. What use would there be in this?” “Shen Hsiu is our senior instructor and teaching transmitter. Certainly he should be the one to obtain it. It would be not only improper for us to compose a verse, but a waste of effort as well.”

In front of the Fifth Patriarch’s hall were three corridors. Their walls were to be frescoed by Court Artist Lu Chen with stories from the Lankavatara Sutra and with pictures portraying in detail the lives of the five patriarchs, so that the patriarchs might be venerated by future generations.

After composing his verse, Shen Hsiu made several attempts to submit it. But whenever he reached the front hall, his mind became agitated and distraught, and his entire body became covered with perspiration. He did not dare submit it, although in the course of four days he made thirteen attempts.

Then he thought, “This is not as good as writing it on the wall so that the High Master might see it suddenly. If he says it is good, I will come forward, bow, and say, ‘Hsiu did it.’ If it does not pass, then I have spent my years on this mountain in vain, receiving veneration from others. And as to further cultivation–what can I say?” That night, in the third watch, holding a candle he secretly wrote the verse on the wall of the South corridor, to show what his mind had seen.

The body is like a bodhi tree
the mind a mirror bright
at all times wipe it clean
and let no dust alight.

After writing this verse, Shen Hsiu returned to his room, and the others did not know what he had done. Then he thought, “If the Fifth Patriarch sees the verse tomorrow and is pleased, it will mean that I have an affinity with the Dharma. If he says that it does not pass, it will mean that I am confused by heavy karmic obstacles from past lives, and that I am not fit to obtain the Dharma. It is difficult to fathom the sage’s intentions.” In his room he thought it over and could not sit or sleep peacefully right through to the fifth watch.

The Patriarch already knew that Shen Hsiu had not yet entered the gate and seen his own nature. At daybreak, the Patriarch called Court Artist Lu Chen to fresco the wall of the south corridor. Suddenly he saw the verse and said to the court artist, “There is no need to paint. I am sorry that you have been wearied by coming so far, but The Diamond Sutra says, ‘Whatever has marks is empty and false.’ Instead leave this verse for people to recite and uphold. Those who cultivate in accordance with this verse will not fall into the evil destinies and will attain great merit.” He then ordered the disciples to light incense and bow before it, and to recite it, thus enabling them to see their own nature. The disciples all recited it and exclaimed, “Excellent!”

At the third watch, the Patriarch called Shen Hsiu into the hall and asked him, “Did you write this verse?” Shen Hsiu said, “Yes, in fact, Hsiu did it. He does not dare lay claim to the position of Patriarch, but hopes the High Master will be compassionate and see whether or not this disciple has a little bit of wisdom.” The Patriarch said, “The verse which you wrote shows that you have not yet seen your original nature but are still outside the gate. With such views and understanding you may seek supreme Bodhi, but in the end will not obtain it. Supreme Bodhi must be obtained at the very moment of speaking. In recognizing the original mind, at all times, in every thought, you yourself will see that the ten thousand Dharmas are unblocked; in one truth is all truth and the ten thousand states are of themselves ‘thus,’ as they are. The ‘thusness’ of the mind, just that is true reality. If seen in this way, it is indeed the self nature of supreme Bodhi.”

“Go and think it over for a day or two. Compose another verse and bring it to me to see. If you have been able to enter the gate, I will transmit the robe and Dharma to you.” Shen Hsiu bowed and left. Several days passed, but he was unable to compose a verse. His mind was agitated and confused and his thoughts and mood were uneasy. He was as if in a dream; whether walking or sitting down, he could not be happy.

Two days later, a young boy chanting that verse passed by the threshing room. Hearing it for the first time, Hui Neng knew that the writer had not yet seen his original nature. Although he had not yet received a transmission of the teaching, he already understood its profound meaning. He asked the boy, “What verse are you reciting?” “Barbarian, you know nothing,” replied the boy. “The Great Master has said that birth and death are a profound concern for people in the world. Desiring to transmit the robe and Dharma, he ordered his disciples to compose verses and bring them to him to see. The person who has awakened to the profound meaning will inherit the robe and Dharma and become the Sixth Patriarch. Our senior, Shen Hsiu, wrote this ‘verse without marks’ on the wall of the south corridor. The Great Master ordered everyone to recite it, for to cultivate in accord with this verse is to avoid falling into the evil destinies and is of great merit.”

Hui Neng said, “I, too, would like to recite it to create an affinity. Superior One, I have been pounding rice here for over eight months and have not yet been to the front hall. I hope that the Superior One will lead me before the verse to pay homage.” The boy then led him to the verse to bow. Hui Neng said, “Hui Neng cannot read. Please, Superior One, read it to me.” Then an official from Chiang Chou, named Chang Jih Yung, read it loudly. After hearing it, Hui Neng said, “I, too, have a verse. Will the official please write it for me?” The official replied, “You, too, can write a verse? That is strange!”

The official said, “Recite your verse and I will write it out for you. If you obtain the Dharma you must take me across first. Do not forget these words.”

There is no Bodhi tree
Nor a mirror bright
Buddha Nature is empty and clean
So where can dust alight?

When this verse had been written, the followers all were startled and without exception cried out to one another, “Strange indeed! One cannot judge a person by his appearance. How can it be that, after so little time, he has become a Bodhisattva in the flesh?”

The Fifth Patriarch saw the astonished assembly and feared that they might become dangerous. Accordingly, he erased the verse with his shoe saying, “This one, too, has not yet seen his nature.” The assembly agreed.

The next day the Patriarch secretly came to the threshing floor where he saw Hui Neng pounding rice with a stone tied around his waist, and he said, “A seeker of the Way would forget his very life for the Dharma. Is this not the case?”

Then the Fifth Patriarch asked, “Is the rice ready?” Hui Neng replied, “The rice has long been ready. It is now waiting only for the sieve.”

The Patriarch covered them with his precept sash so they could not be seen, and he explained The Diamond Sutra for him down to the line, “Keep a mind that alights on nothing whatsoever.”

At the moment he heard those words, Hui Neng experienced the great enlightenment and he knew that all the ten thousand dharmas are not separate from the selfnature. He said to the Patriarch:

The Fifth Patriarch knew of Hui Neng’s enlightenment to his original nature and said to him, “Studying the Dharma without recognizing the original mind is of no benefit. If one recognizes one’s own original mind and sees one’s original nature, then one is called a great hero, a teacher of gods and humans, a Buddha.”

He received the Dharma in the third watch and no one knew about it. The Fifth Patriarch also transmitted the Sudden Teaching and the robe and bowl saying, “You are the Sixth Patriarch. Protect yourself carefully. Take living beings across by every method and spread the teaching for the sake of those who will live in the future. Do not let it be cut off.”

What was your original face before your parents were born?

This open empty clarity has been with you since the very beginning.

Once you truly know it you will laugh and laugh.

You’ll see how funny it was to be a Buddha running around in search of a Buddha.

Your mind is pure and empty. Like a mirror reflecting all things and unaffected by whatever arises.

You’ll awaken to see Buddha lands in every direction.

You awaken to see Buddha is everything.

This very moment will be perfect and serene.

How amazing it will all be.

Words can’t really get at it so this is why Zen is all about the silent confirmation of truth.

Truth is beyond words so don’t cling to these ramblings of mine.

Look back at what’s looking.

You’ll only find the empty clarity and stillness of mind.

Rest in the great peace that can be found right here – right now.