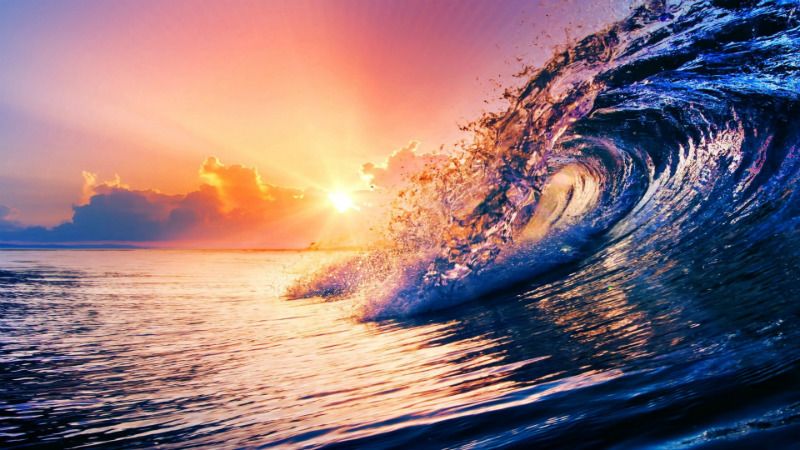 Sitting there in meditation, still and grounded, the isolated confines of my individual consciousness dissolved and the world became a trembling, vibrating ocean of suchness.

The aspect of the ocean that was me would appear like a energetic wave rising from the endless vast sea of energy and information.

This wave held patterns of information, preferences, habits, memories – all of which were labeled and designated as “Ian” but Ian did not exist.

The ocean in that spot became an Ian but there really, truly is no “Ian” there.

Ian was just a wave upon this ocean of bliss.

A vast expansive sea of potentialities.

A cosmic ocean of consciousness that is “us” and our “job” is to embrace the flow of the wave (our individual uniqueness – your gifts and talents, your quirks and crazy) while all the while knowing that you’re the ocean of infinite potential.

Beyond beginning and end.

Remember that your are this ocean of consciousness and in this brief moment of movement, that ocean is rising as you.

The idea that you are separate from this vast expanse is an illusion.

There is Only Consciousness by Jackson Peterson
http://www.wayoflight.net/

Imagine there being an infinitely vast field of empty, yet cognitive space of Consciousness. Sense this as being an empty, clear sky of non-localized, pure awareness.

The natural atmospheric qualities of this vast sky of pure Consciousness, are the qualities of its of own contracting and expanding, vibrating, energetic fluctuations of cognitive states.

Instead of clouds of moisture forming, as in an ordinary sky, spherical clouds of Consciousness appear as a localized, contracting moment of cognitive “I am-ness”.

This sphere of individual consciousness can self-contract further to a point of almost infinite density or it can relax its inward gravitational pull centered around its sense of “I am-ness” and expand fully and dissolve back into its empty, yet cognitive sky of its own Natural State.

Whether one is inhabiting any particular domain of samsaric experience (the Six Lokas), is determined by one’s degree of energetic self fixation.

Yes, by clinging to the sense of personal identity, we get a sense of being a continuing self, but at the price of forfeiting the Natural Bliss of Being, which always, intrinsically attends our impersonal Natural State.

Our nature is always this Divine Consciousness, even in the contracted state of localized selfhood. This is like water appearing as an ice cube.

No matter how energetically contracted our inner consciousness seems to be, it is never other than contracted Consciousness, whose fundamental nature is “Knowing Awareness”.

By recognizing our own empty, “Knowing Awareness”, at any time, there is a relaxation and expansion, whether great or small, back into our own impersonal Natural State, like ice melting back into water.

This is the whole point of the Buddha’s teaching on “Anatta”. Personal selfhood is the hallucinatory result of the contraction around the “me” sensation and belief. It seems all phenomena in the universe have this clinging to a quality of individual identity, especially amongst living organisms with their universal “urge to survive”.

Notice your own cognitive capacity that is “aware and knowing”, relax into its spacious and empty clarity, free of all topics. Consciousness will revert to its impersonal Natural State of crystal clear transparency and self-illuminating wisdom spontaneously.