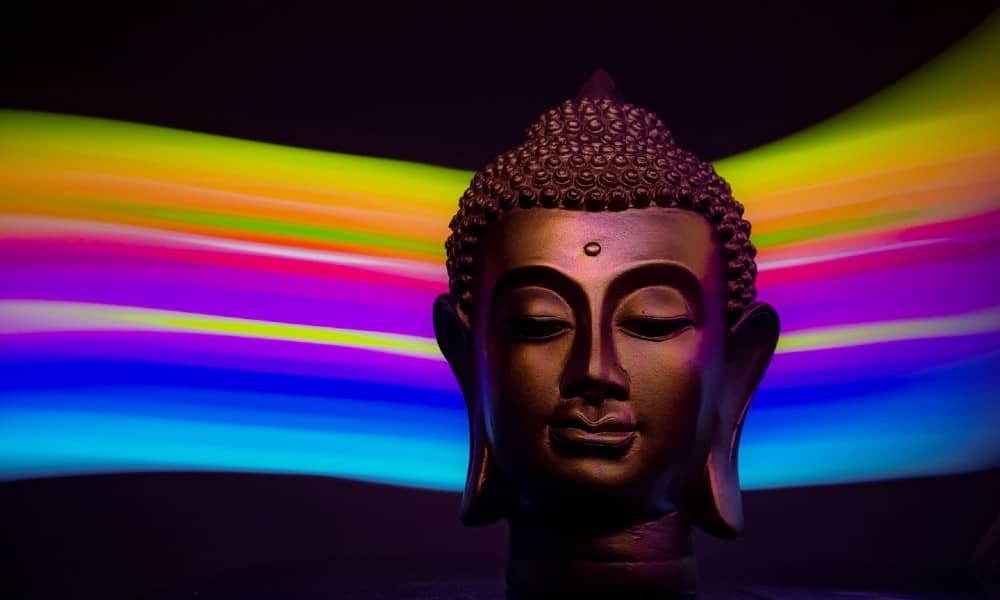 “A special transmission outside the scriptures,
not founded upon words and letters.
by pointing directly to one’s mind,
It lets one see into one’s own true nature
and thus attain buddhahood.”

For years I followed the instructions of my teacher to “Put it all down” and then see into the very nature of my mind.

Zen Master Bodhidharma brought this teaching to China and is considered the founder of Zen.

Bodhidharma was the youngest of three princes. At an early age he had an interest in truth. And this curiosity led him to give up his princely ways and study under the female Master Prajnatara.

It was Prajnatara that commissioned Bodhidharma to leave his home in India and travel to China to spread the teachings of the Mind to Mind transmission.

China was experiencing an explosion of interest in the dharma with huge amounts of people dedicated to translating and studying the sutra’s. When Bodhidharma arrived in China, in the latter part of the fifth century, there were approximately 2,ooo Buddhist temples and 36,ooo clergy in the South. In the North, a census in 477 counted 6,500 temples and nearly 8o,ooo clergy. But there were no realized Masters of the Way. They were lost in words. Getting further and further away from the truth.

Seeing this, Prajnatara felt great compassion and entreated Bodhidharma to make the harrowing journey to help awaken these beings from their dependence on words and show them the truth of their minds. He was asked to transmit the Mind Seal.

A student once asked Bodhidharma, “If someone is determined to reach enlightenment, what is the most essential method one can practice?”

“The most essential method, which includes all methods, is beholding the mind.”

“But how can one method include all others?”

“The mind is the root from which all things grow. If you can understand the mind, everything else is included. It’s like a tree. All of its fruit and flowers, its branches and leaves, depend on its root. If you nourish its root, a tree multiplies. If you cut its root, it dies.”

“But how can beholding the mind be called understanding?”

“When a great bodhisattva delves deeply into perfect wisdom, he or she realizes that the four elements and five shades are devoid of a personal self. And he realizes that the activity of his mind has two aspects: pure and impure. By their very nature, these two mental states are always present. They alternate as cause or effect depending on conditions, the pure mind delighting in good deeds, the impure mind thinking of evil.”

“Those who are not affected by impurity are sages. They transcend suffering and experience the bliss of nirvana. All others, trapped by the impure mind and entangled by their own karma, are mortals. They drift through the three realms and suffer countless afflictions. And all because this impure mind obscures their real self.”

“The Sutra of the Ten Stages says, “In the body of mortals is the indestructible buddha-nature. Like the sun, its light fills endless space. But once veiled by the dark clouds of the five shades, it’s like a light inside a jar hidden from view.” And the Nirvana Sutra says, “All mortals have the buddha-nature. But it is covered by darkness from which they can not escape. “”

“Our buddha-nature is awareness: to be aware and to make others aware. To realize awareness is liberation.”

“Everything good has awareness for its root. From this root of awareness grows the tree of all virtues and the fruit of nirvana. Beholding the mind like this is understanding.”

You have to want to be free. You must break free from the prison of mind that you’re wrapped up in and trapped by.

The way is easy for those of us who don’t get distracted by words, concepts and ideas.

Going beyond the meanderings of mind they discover an open spaciousness that is empty, pure and clear – unaffected by all our shenanigans.

There are no books to read or concepts to memorize. We just put it all down and look into the mind.

When you look into your own mind and you’ll yourself come to discover that mind has two aspects.

One aspect is the small mind which is bound in thoughts, ideas and concepts. It’s always changing, changing, changing. It loves and delights in greed, hatred and delusion. Always caught up in me-me-thinking. Lost in the delusion of “I am.” We’re all very familiar with this mind and it probably controls most of our days.

The other aspect of mind is awareness. It’s open, empty and unhindered like space. Zen Master Shen-Hui said, “The single word awareness is the gateway to all mysteries.”

My teacher Zen Master Hwasun Yangil Sunim said to me, “If you want to discover universal truth then you must discover the truth of the self.”

This true self is beyond all concepts of a you, a person and a being.

This true self is open and free.

You yourself right now are in possession of this true self.

We just look back at the space like nature of mind. That open clarity in which all thoughts, emotions and perceptions arise in.

If you look back at your mind right now you will discover that it is clear, still and empty. It’s like a mirror reflecting whatever arises and at the same time is unaffected by appearances. There’s nothing holy or special about it. So when you sit, just sit deeply in awareness. Just remain vividly awake. It’s very simple and ordinary. Nothing special whatsoever.

This empty clarity has been there your whole life. It is unchanging. Unborn. It is pure and unaffected by all your worries and woes.

The Master’s throughout time have had this empty open mind pointed out to them. All of them have put down conceptualizing and studying and have just sat nurturing awareness.

The small mind seeing it’s true nature dissolves into this emptiness. It’s like a wave realizing it’s actually the ocean.

The currents and torments of the small mind are stilled by not engaging in it’s own fantasies. Not grasping at appearances. Not being attached by the 10,000 things. Just let go and be at ease in the open spaciousness of mind. After all thoughts, memories and ideas have dissolved the empty, clear, still mind remains. It’s always there even in the midst of thoughts, memories and ideas. But once a mind is still one can see and recognize for oneself that the nature of mind is calm, clear and empty.

Bodhidharma’s student Dazu Huike sat still gazing at the wall for a long time in order to cut off all thinking and conditioning.

When he had cut off all conditioning, Bodhidharma asked, “Have you gotten rid of it or not?”

He answered, “Even though I have cut off all thought, I have still not gotten rid of it.”

Bodhidharma then asked, “What proof do you have to say that you haven’t gotten rid of it?”

Huike answered, “It is utterly self-evident; words could never get at it.”

The Master thereupon sanctioned (yin) him, saying, “Just this is the intrinsically pure Mind. Have no further doubts.”

Nurture the empty field of awareness. To nurture something is to pay attention to it. To care for it. To be interested in it.

Let go of grasping at the conjurings of the small mind and rest in the radiance of the empty, still, clear mind that is with you always.

To allow your Buddha Nature to shine through is to affirm that the Buddha is here right now. In this place as this very moment.

This moment free of all thought.

So rest in thought free awareness and discover the truth for yourself.

Let all concepts and ideas fade away and find out for yourself the innate wisdom bliss that is your birthright.

Bodhidharma said, “The eternal bliss of nirvana comes from the mind at rest.”

Put it all down and see into the nature of your mind right now. That empty, still, clear mind which is with you always.

Just allow the currents of mind to settle and your Buddha Nature will be revealed to you.

Claim your inheritance now for you yourself are a Buddha.