I’ll Remember for You 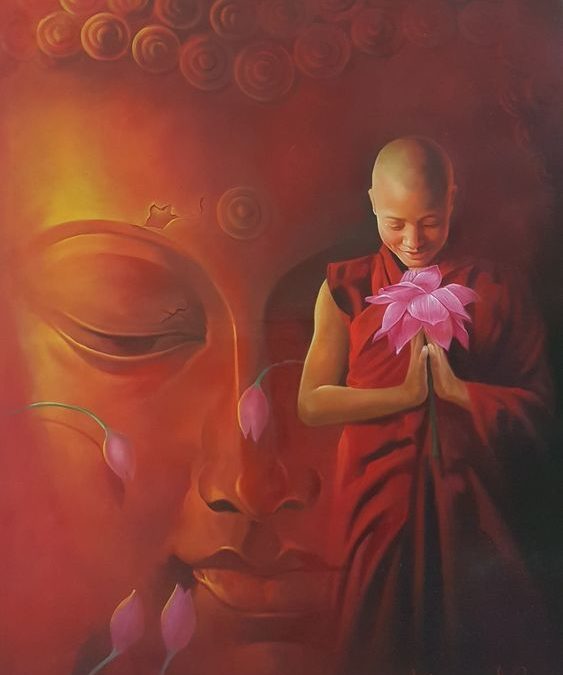 I’ll Remember for You

Student: Suddenly my ex got stuck on the fact that he thought I was gonna take that money for myself. And no matter how I tried to explain, “This is my child. You know, I’ve done everything for him for 20 years. Do you think I’m suddenly going to turn my back and what? Put him on the streets?” He couldn’t seem to grasp it but he just kept sticking and sticking.

And then I said, I could get out of my head, “What is it that he needs?”

As soon as I changed my tone, and I said, “I understand you love your son. You want to secure his future, I will do my best for him.”

And I changed my tone right away and his tone changed.

So just putting myself into his shoes and not getting caught up in the drama of, “Oh my god what’s he accusing me of?” Natural reaction. I was able to put that down and just look at it from his point of views. Where’s he going with this? What does he need from me? He needs some reassurance that I understand that He loves his son and that he’s worried about his future. As soon as I acknowledged that it went much smoother. So we’re this close!

A lot of times, that’s all – People think it’s us versus them. It’s like, right it’s a versus world out there. Right. That everybody is enemies and right, like we talked about last week, right? This selfish but even like in these moments, right? where like, even though on the exterior, he was being fierce, right? Protective. Even maybe downright mean maybe.

And when you were able to see past that right into their (points into her heart).

And everything that’s been playing out in the divorce over the last little while. hasn’t been the most fun. Right? The whole system is set up: You’re on one side of the table. Right? It’s a whole us versus them.

But then when we’re able to like – because he could feel that energy change, right? Because before is this (adversarial – facing off against each other), Right?

And then you’re gone then. And when you disappeared where did you end up?

Student: Seeing it from his point of view.

Zen master e: Yeah. With him

To see what is arising right in that sphere, right?

They talk about that we’re all within our own little Mandala’s, and the world arises around us, right. And one of the things that helps with the practice and the Dharma and coming here is that we’re able to, like just put down ourselves. These hard boundaries of ourselves.

And we’ve become more and more sensitive to us first, right? And what’s going on within us, right, so that we’re not caught and hooked so fast, Right?

And then that softness, that sensitivity, helps us be sensitive to those things in others, Right.

And a lot of times, that’s the thing, I like to use the word recognition, right, like, you know, like, “Oh – They see me, they hear me, they feel me.”

That was like a trance song in the 90s. And it’s so beautiful and true, right?

That if we can see someone, if we can hear them, we can put ourselves over there. Right? And then if we can come, if we can be with that person in such a way that we’re then on their side of the table.

Student: He needed me to feel that he was expressing emotionally – he presenting it as an accusation – but there was fear. There was all this fear for him. I feel the same fear so – once I acknowledged, “Oh I see you care.”

Zen master e: Has he ever put himself in the capacity of taking care of your son? (she shook here head no) So that’s probably worry for him as well. Right?

Just the sounds. The movements. Even I’m like, “Look at this!” I’m, I’m watching the thing too! The hand pouring. The steam coming up.

I like the word that you used earlier – wonder – you know,

And this is the benefit – we open up. Right, we open up – we’re so closed off like this. We have our hands closed and we keep the cards close to our chest. Right. And then all of a sudden, we’re just open and vulnerable.

You will see that sort of stance a lot of the times with Bodhisattvas – just open – just open, chest exposed. Right?

Even we talked about Samantabhadra – So in the ati yoga tradition, Samantabhadra is naked. Naked. Just the fundamental naked state of mind. Innocent, pure, open, accepting.

Even these words don’t even make sense in that state.

And if there’s nothing here on our side, then we’re omni directional, Omni experiential, right? And it’s just, we go into that resonance, that picture and light show that we call your ex-husband and they we, “Oh my god look at this mandala, look at this feeling, look at this – no wonder these thoughts and emotions and fears and hopes and worries. Oh, my gosh, that’s, that’s terrible.”

No wonder – these words are coming out of that person’s mouth.

Doesn’t mean that we agree with them. No. And “Hey, you treat me with far more respect.”

But now we understand where it’s coming from. Ah why these things – why you’re being so rough. Right? So bristly. Putting up such a fight. Because you’re worried and you don’t know how to articulate that and express that. Because you weren’t given the opportunity, the testing ground, to have that feel like a safe space, especially in that situation, that boardroom or wherever you guys were meeting is not wasn’t a safe space, right? Until you made it safe. Right, Until you made it safe.

And that’s like, with the practice and everything that we’re doing – we become a safe space.

We become that safe harbor that refuge for everyone and every moment and it doesn’t matter.

Oh, my gosh. He’s doing the best that he can, man. You know?

And we have to have some sympathy and compassion for that. Because that’s hard. Because we know how, how hard life was for us before we got the Dharma, the teacher, the Buddha, the Sangha.

And all we can do is be a safe space. Right? Ready.

That’s why I like – you ever see that sculpture of Quan Yin, or Avalokitesvara, just sitting back and has one leg out, like ready to pounce at any moment, if they get called to help. I need you to help. But totally at ease. 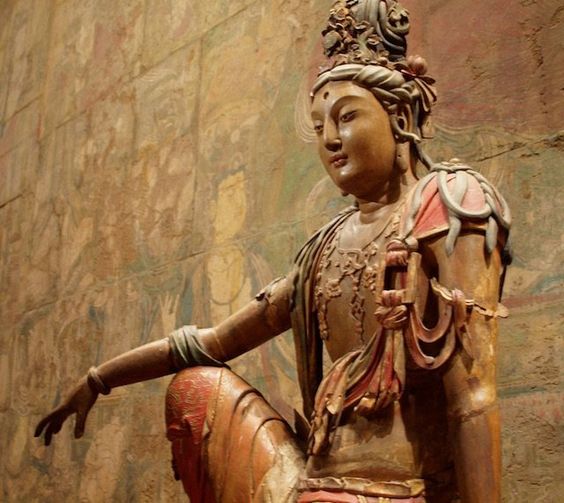 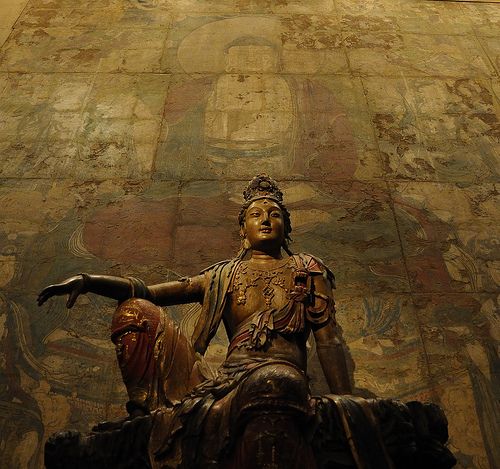 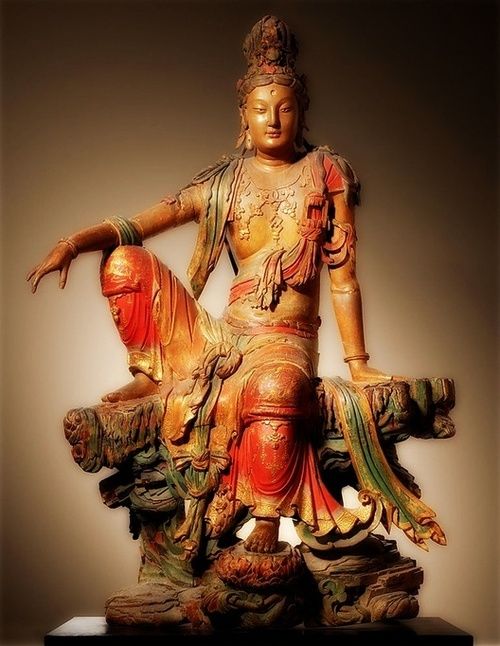 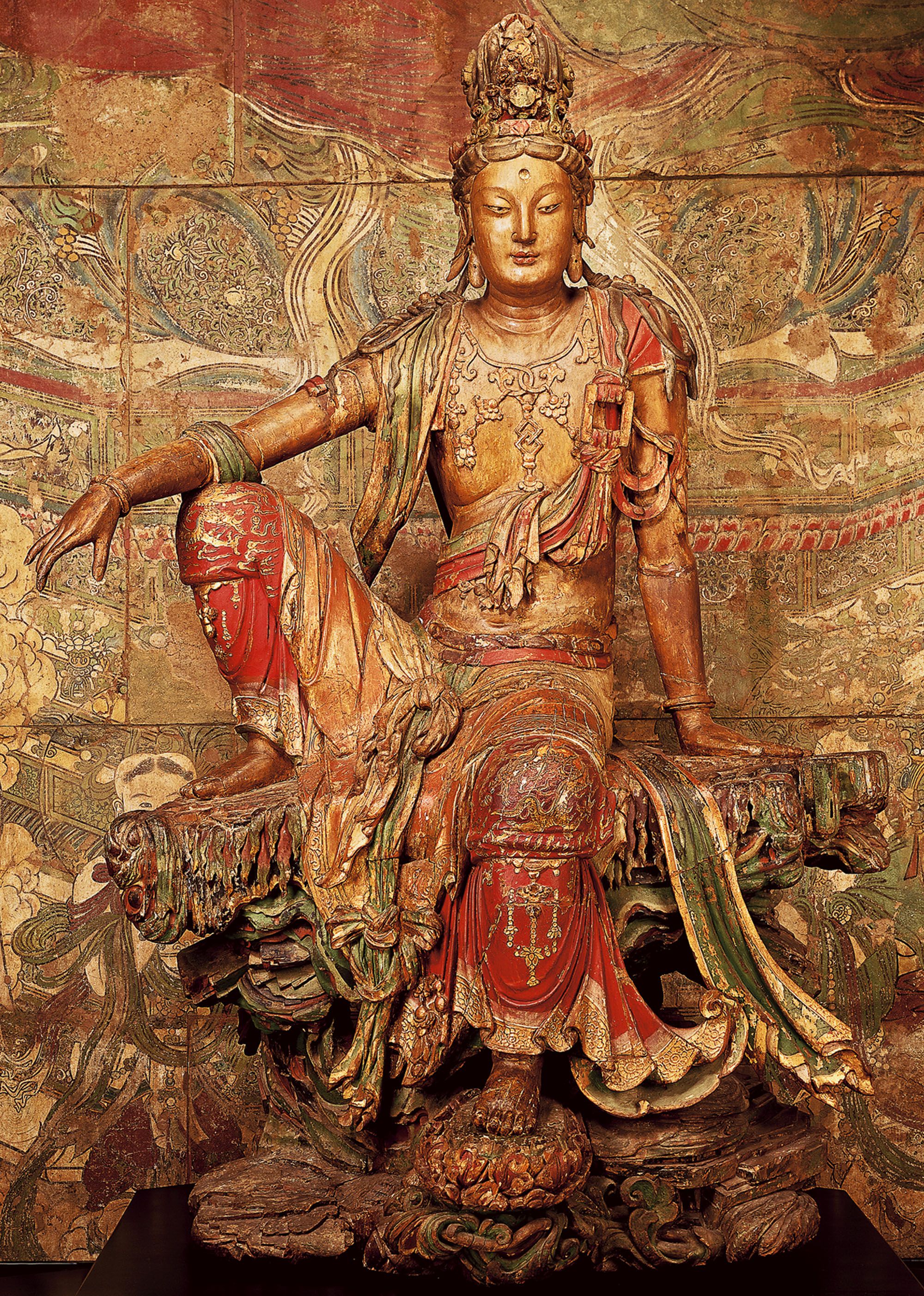 And you, you can’t help but be drawn to that – pulled into that. Right?

So the more and more we get familiar with that – the more that we are at ease in every moment – which allows other people to be at ease – to drop everything that they’re holding. Right? Their worries, their fears, their frustrations, their exhaustion.

We allow them to be authentic.

Because we have been more and more authentic with ourselves.

And it’s not all unicorns and rainbows.

This is the big difference, right?

What is this feeling? Right? Oh, that sadness. Hello. Hi.

Right, And we nurture it. Like we give it the space it needs to. What’s the story? What’s the wisdom? What happened here?

Just to be able to – you know, that saying right “Walk a mile in a person’s shoes.”

It’s true, There was a person that I know, that wants to be a police officer, right. And they, they made some choices that weren’t the most skillful. And they made those choices from a place of lack. They thought they only had one option. And I was like, it’s very interesting huh? So now now we can see how – when the field seems to get narrowed down these type of choices like the choice that you made seem to be the only thing that you can do.

So we need to bring that heartfelt wisdom to every moment, right and in their situation. Right, we need to see because we’re quick – society is quick – Criminal,

Quick. And that sticks for life.

Sometimes It’s the only…

Like we talked about last week, right? When we’re at ease, sipping a mojito on the beach, the only crazy thing that we might be getting up to is another mojito. Right.

And maybe, you know, like that, What’s that thing? We go underneath the bar? Limbo? Limbo rock? Right. Right.

Yeah. And that’s why like, ease is one of the fundamental things to come back to.

The more easy we are with ourselves, at ease, at peace – like a resonant field goes out and around and is needed in general, but especially in situations like that, where it’s totally designed for me versus you – conflict. That’s not right. Right.

The whole thing is just a stage of vengeance.

Because it started out with togetherness right? Your marriage. Right?

We go in there, Right. Yeah.

And I don’t think he probably he probably didn’t say thank you for seeing it from his perspective.

But there is like, did you see any shift?

Student: It was done via email. If the lawyers were involved it would have been much – It wouldn’t have happened. But we were communicating via email.

Zen master e: Wow, you’re able to do that via email.

Student: Yeah, because I find that the lawyers make it very confrontational.

Zen master e: Yeah because they’re throwing out a lot of shoulds.

Student: I sent him something and tried to explain that I would never turn my back on my child. I would never. Ever.

Student: He was like, “You’re the one who took me to court. I can’t trust you. He was mixing up a lot of stuff. I had to put all that down. And just realize that he needs me to say, “I know you love him too. And that you want the best for him. So do I.” And then all of a sudden we’re on the same team. Which is exactly what you just said.

Zen master e: When we get into that heart resonance, that’s why like, it’s interesting,have you ever seen different systems, they usually have like the Star of David at the heart, and it’s, omni directional spin and the union of opposites, Right.

When we’re in that heart space, there is no sides.

You know, just love and understanding and that feeling of warmth and fullness.

Student: Yeah I’m not there though.

And that they showing up and “Oh, hey, Buddha ex-husband. You don’t know that you’re Buddha. You’re a Buddha. All right – You’re gonna keep doing this. All right.”

Well I’m gonna keep remembering – for you. For you. I’ll remember, for you.

And that’s what we do.

That’s the thing that we were talking about.

Boom! All of this arose and Samantabhadra wasn’t bamboozled.

I’m very happy that you’re getting closer and closer.

So that might be a really good practice for you to take up during this time.

Because it works beyond words. It’s really good.